Posted on November 9, 2013 by auluftwaffles

The MTS-255 Shotgun is a double action shotgun which essentially lets you fire semi automatically. It has the highest fire rate but is average otherwise. The main problem is the small magazine size, you only get 5 slugs between reloads. Move around the map so that you stay in close quarters and always fire from the hip.

Due to the high visual recoil of the MTS-255 aiming down the sight and getting successive shots on target is difficult. Therefore always fire from the hip and try to avoid fights that are at the edge of your range. Usually it takes more than one slug to kill enemies so reload frequently in safe positions. Taking out multiple enemies is hard due to the small number of slugs between reloads.

Since the MTS-255 only has average range and damage you have to be very close to enemies to kill them. Therefore stay away from objectives and don’t attack enemies that are out of your range. If they aren’t allerted try to get closer. If they are try to retreat or use cover to get to them or lure them closer. 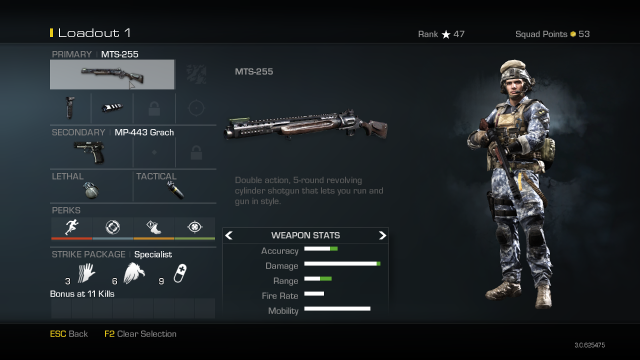 The high recoil of the MTS-255 makes it hard to hit successive shots, even when you fire from the hip. Use the Foregrip to keep the recoil under control. To increase the range of the MTS-255 us the Muzzle Brake which helps especially at the edge of your range.

There are several problems the MTS-255 has, such as the recoil, flinching and range. Use perks that help you out with each of those. Marathon gives you unlimited sprint making it easier to get close to enemies quickly. Steady Aim reduces the hip fire spread of the MTS-255 giving you some extra range and letting you kill more reliably. Amplify lets you hear close by enemies. If you don’t have headphones use Ping instead. Focus reduces flinching which is helpful even when you fire from the hip.

In summary the MTS-255 is good at taking out single enemies at short range. Use the Foregrip, Muzzle Brake and selected perks to increase your range and make it easier to get close to enemies.