Posted on February 11, 2013 by auluftwaffles

Hello, I am David Andersson, and welcome to the guide for the optional part of chapter 5 – Expect delays which is called Conning Tower on the impossible difficulty.

Before you go up the elevator be sure to check around for loot. When you exit the elevator two enemies drop down in front of you. When you hear them coming be sure to turn around and run back towards the elevator to get some room between you and them. Either another enemy will come at you or drop down when you keep going.

Next you get into a large room with some stairs in it that leads to the communication den. There is plenty of loot around. When you try to keep going the door is locked and enemies are released on you. Straight after the door locks on you turn around and go to the left into the corner near the upper end of the stairs:

To release the lock down go to the console on the wall on the left side of the locked door. You have to rotate the indicator slowly to find the blue triangles, then activate them. Don’t activate the red triangles.

When you exit the communication den you see a beam of electricity across the way. Shoot the glowing fuse box to deactivate the electricity. When you open the door three more enemies come at you. If you feel overwhelmed retreat a little and the door will close again which will let you take care of them one by one. The next fuse box is on the right wall behind the small section of wall sticking out: 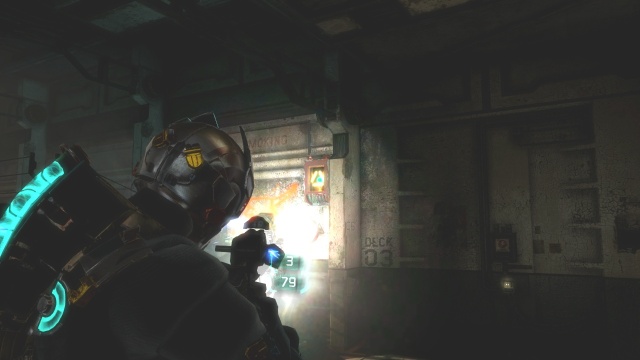 The last fuse box is on the far wall:

After you go down the cargo lift and keep going down the corridor two enemies pop out of the yellow boxes. Quickly take care of them and turn around as there will be another enemy behind you. In the room you get into after going through the door ahead another enemy will come at you from a yellow box.

When the gravity plating is reversed on you go down the ladder, follow the corridors below and go back up a ladder at the end. There will be another electricity beam and an enemy will jump out of an air shaft behind you. After him two more enemies come at you from the other side of the electric beam. Approach the beam on the left side and shoot the fuse box you can see to the right on the opposite wall.

Now you get to a room that you need a tungsten torque bar to open. It is worth spending the 20 tungsten since you will find at least 20 tungsten and more resources in that room. After going down the ladder near the door to the locked room shoot the fuse box inside the ventilation shaft:

When you go forwards an enemy will come at you from that shaft.

Now you get into the engine room access. In it you will be locked in again and a number of enemies will come at you. I found that the best place to be was down stairs behind the railing of the stairs:

You have to keep an eye on the ventilation shaft ahead and the stairs that go down to you. Regardless it will be difficult not to get hit. Use stasis if you need to.

To release the lockdown you have to align the different discs so that all are connected. Turn the middle disc so that the small connection faces up and to the left and match both the top left and top right connection as required. Also adjust the disc below the middle disc so that it is connected. Next adjust the last two discs in the proper direction:

Backtrack to where the gravity plates were reversed on you. You find more enemies in the corridor after going up the first ladder. Immediately turn left to be ready for an enemy. Then turn right and you will see another enemy jump onto the catwalk. The last enemy will come at you from where you shot the first enemy.

After going down the ladder turn right and an enemy will be in your face. One more enemy will pop out soon after the first. No more enemies will try to kill you before you reach the elevator that was blocked off by the reversed gravity plating.

Go up the elevator to the second level. Pick up the key and the various loot around the place. Then take the elevator up to the third level and then the cargo lift up. In a nearby room you will find the loot stash.

The second from the left is a tentacle enemy. The second last is a runner who you may have to use stasis on to make sure you can get him. The last is another walker.

Way Back to the Shuttle

Now you have to go back down to the shuttle. Backtrack all the way. On the way back you will encounter a few more enemies. The first is in the area where you first encountered the electric beams. Here one enemy with an explosive sack will come at you. The next area is the communication den where one enemy will drop on top of you and another comes out of the far wall. Run at the enemy near the far wall first and take him out, then turn around and take out the enemy behind you. One more enemy comes out of the wall outside of the communication den.

The last area is where you first were locked in. Here it will be difficult not to get hit as several runners and distance fighters are spawned. Use stasis on enemies that get too close to you and try to get in the same spot as before.

After that you have completed the optional part of Chapter 5 – Expect Delays.