Posted on February 9, 2013 by auluftwaffles

Hello, I am David Andersson, and welcome to the guide on the impossible difficulty for the fourth chapter of Dead Space 3 which is called Expect Delays.

In the starting room there is a bit of loot. You will need to get all the ammunition you can for this mission, so be sure to use the crafting bench nearby to create some ammunition. After that go down the elevator.

You are now back in the generator room from the end of chapter 3. Pull down and activate the first ring. A giant tentacle will come up. Use stasis on it and shoot the glowing bulge until you have severed the tentacle: 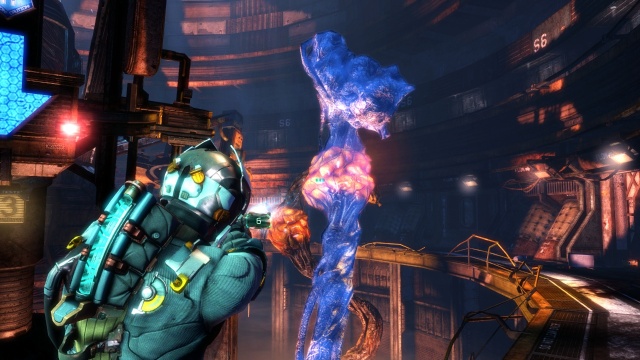 Then turn around and shoot the much smaller tentacles of the enemy there.

Sometimes the next big tentacle is already up, sometimes it isn’t. If it is be sure to shoot it. If it isn’t it will be up once you have lowered the next ring, but before you take care of it kill the enemy that spawns behind you. If it runs at you use stasis. After you have dealt with it and the tentacle wait until at least one stasis charge has regenerated then activate the second ring to clear the way ahead. Two enemies will start to run at you. You do not have two stasis so do your best to get one enemy without it. They come at you from far away so it shouldn’t be too difficult.

Stay back and shoot the next giant tentacle from far away where it can’t attack you. Then keep going and lower the last ring. One more enemy will come at you. You don’t have to shoot the last giant tentacle since it can’t reach you, but it isn’t too difficult to do in any case.

Getting Past the Fans

When you activate the last ring you can access to the door out of the generator room. Next you get into an air circulation shaft. Use the stasis recharge station to fill up your stasis and use stasis on the blades when you get close to them:

In the next corridor two enemies will come at you. Walk out and to the left straight away and retreat as required to take care of them. There is some loot in the area.

Now you have to solve the engineering puzzle. You have to move the two light and dark blue circles to the two highlighted nodes before the time on them runs out:

On PC one is controlled with the keyboard and the other with the mouse. On console they are probably controlled by the two joysticks. When you have finished the puzzle you can go up to the admiral’s quarters in the elevator.

Afterwards go back down in the elevator and go through the meeting room. When you get to the exit of that room go out of it quickly and run to the right. Turn around and use stasis on the enemy that comes at you and quickly shoot it in the limbs:

There is another of the same kind in the corridor that comes at you from the other end. After you have taken care of that one, one more walking enemy will need to be taken out. That will be the last enemy in this chapter.

To complete the chapter go to the Terra Nova. Soon after you reach it the next chapter begins.