Posted on February 7, 2013 by auluftwaffles

Hello, I am David Andersson, and welcome to the guide to completing the first chapter of Dead Space 3 on the impossible difficulty. I will also show you how to complete the Train Puzzle.

The first fight is against 4 humans. They are best taken care off by shooting them in the head. Be sure to crouch and take out any enemies in sight before advancing your position. Also remember to stomp each body to pick up ammo and health pack drops. After the first fight you get to an area which is highlighted by a flood light. Avoid the grenade but be sure to stomp the dead guy. Next you can just make your way up the ladder ahead. In the area you get to be sure to loot everything around. Once you leave the area you will activate a checkpoint.

Keep following the street. In the streets you will encounter three human enemies:

When you get to the traffic just aim in the general direction of it and activate stasis. There is some loot in the area so be sure to pick that up. Go up the stairs and ignore the enemies down low. There is yet more loot up here. Go through the door ahead. In this area there is some loot. Pick it all up and go up the elevator.

When you wake up again there will be two enemies beating at the window:

It is best to take out the right enemies’ leg, then go around them and into the room ahead where you will have room to manoeuvre. This may not always work since some aspects of the combat are random. For example whether an enemy grows bone tentacles after you shoot it’s legs. Improvise as required.

In the next room go behind the glass to the left and shoot the body on the ground in the legs: 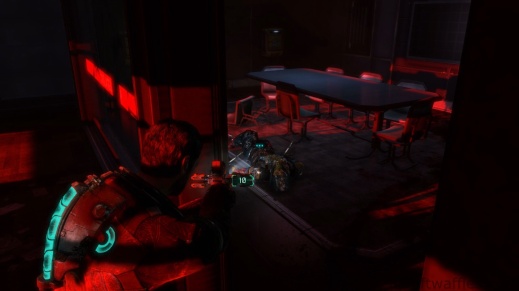 It will then get up and attack you. Keep shooting the legs and the arms once it is on the ground. Next shoot at the body in the round section of the room ahead who will also get up. To the right of the round section is another body that you can shoot who will get up. After you have taken care of both approach the round section, but as soon as you hear screaming back off and take out the enemy that comes at you. Be sure to loot the area and then take the elevator up.

At the top be sure to loot the area and then keep going. In the small market approach the railing ahead. Four enemies will start to run at you. One of them is likely to charge quickly at you so prioritise that one:

Other than that use the market stand in the middle to keep retreating from the enemies until they are all dead. A while after the 4 enemies have attacked you another will come through the wall near the side of the market place you started in. He will be followed by a few more from different directions. Always focus on the enemies that are standing up first by taking out their legs. Then retreat around the market stand and gradually take out all the enemies on the ground.

When you are done with that fight stay on the left side of the market and slowly approach the walkway to the right: 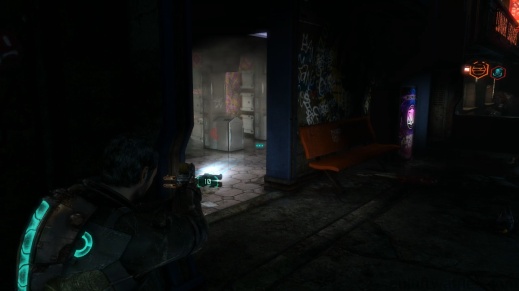 An enemy will come around the corner and attack you, but if you are far enough away it is very easy to take care of. Keep following the walkway until you can see the enemy beating at the shutter. Start shooting it and retreat when it runs at you up the stairs. When you have dealt with it shoot at the legs showing from behind the counter near the exit. Another enemy will start to run at you. Retreat back up the stairs again. Once you have killed that enemy go up the elevator.

Inside it open the door when you can but walk backwards to avoid the fire. Then make your way across the train and up the stairs. Take out the two enemies that are dropped. Keep going along the train. Another two enemies will be dropped. Take out the left one first since it will charge at you and kill you instantly if you don’t:

After that take out the other enemy. Then go to the front of the train. When you are hanging off the ship you will have to complete q quick time event which is to mash a specific button which is shown on the back of the suit.