This is a guide to completing all the challenges for the Dexter Industries mission.

For the chameleon challenge you are required to find and take all the disguises in the Dexter Industries mission.

Load into Factory Compound on the normal difficulty. Shoot the guard leaning on the entrance of the mine and take his outfit. Get to the other side of the bridge by pushing guards off the side of the bridge and jump up to the bathroom window. Pull the truck driver out of the window and drop back down to take his outfit. Go into the garage and wait for the client in the suit to get close to it. Throw something at the wall so that he comes to investigate: 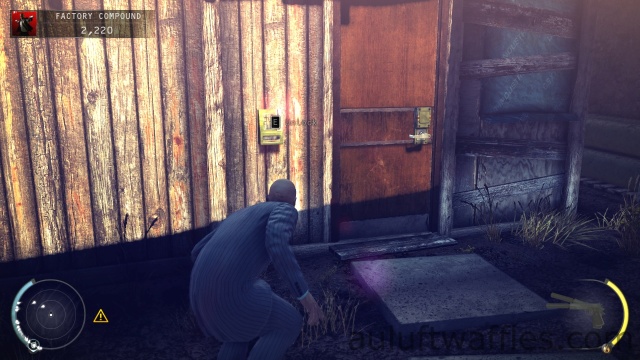 The Charlie the Chipmunk outfit is in the hut.

Completing the Suit Only Challenge

For the suit only challenge you are required to finish each part of the Dexter Industries mission without using disguises.

Load into Dead End on the normal difficulty. At the first security station wait for the guard leaning on the wall to have gone:

Then you can climb into it. After disabling the security system there go to the u-shaped bit of wall and wait for a guard to have walked past you. Then keep going deeper into the area past the right side of the car and take cover on the barrels ahead. Wait for a guard to show up and talk to the guard inside the second security station: 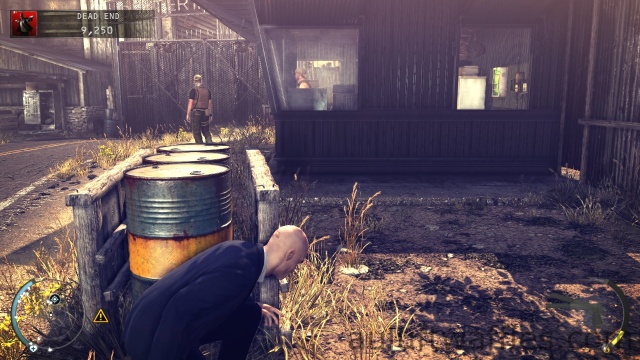 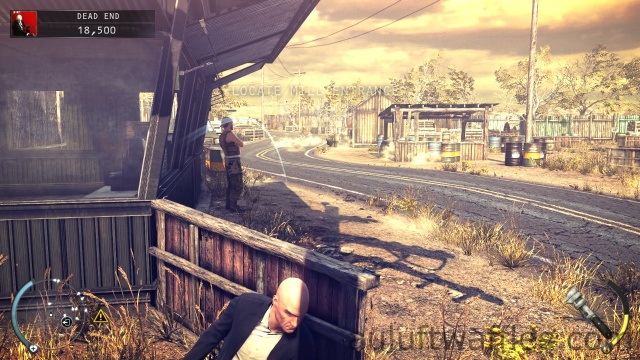 Then you can sneak to the exit of Dead End. In the Old Mill there are only three guards which you can easily shoot. For Descend make your way down to the entrance of the mine and wait for the two guards to finish talking. Then sneak past them and keep going down. Take out the two guards in front of the door then keep going past the door. Follow the walkway outside to a ladder and go to the lower level. Go into the main mine area and enter point shoot mode to take out the guards that are assembled there: 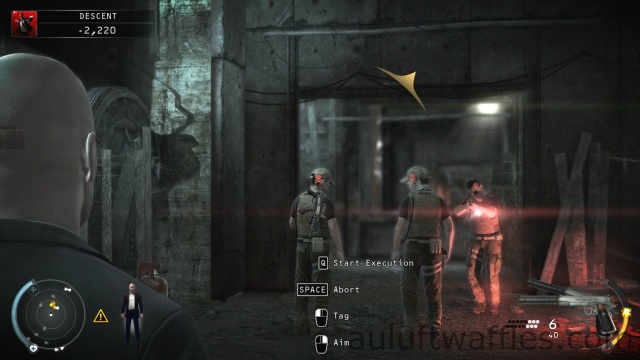 Keep going and take out the last two guards in the area. Now you can finish Descend without worrying about any more guards. In the Factory Compound shoot the guard leaning on the entrance to the mine. Then go over the bridge pushing off the guards near the edge. Go into the leftmost area:

Take out the two guards there. Then go to the roof of the Factory and take out the guard there too. Climb down a ladder into the Factory. Here you will have to take out guards as you see them, entering point shoot mode where necessary: 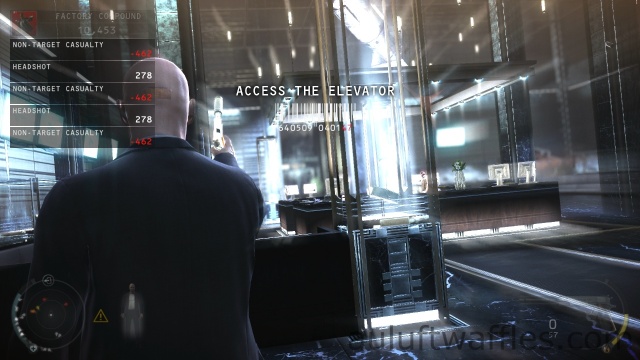 Make your way to the elevator.

For the sore looser challenge you are required to kill the guards playing the video game and destroy the television.

Load into the Old Mill on the normal difficulty. Sneak behind the two guards playing the video game and enter point shoot mode. Mark the two guards and then the television and execute the shots:

For the cliffhanger challenge you are required to kill an enemy with a long drop.

Load into Descend and sneak down to the lower level. Pull the guard out of the window.

For the new toys challenge you are required to kill five guards with proximity mines.

Get the client’s suit in the way described earlier in the chameleon challenge and go to the main lobby. When you are close to it enter point shoot mode and mark the mines: 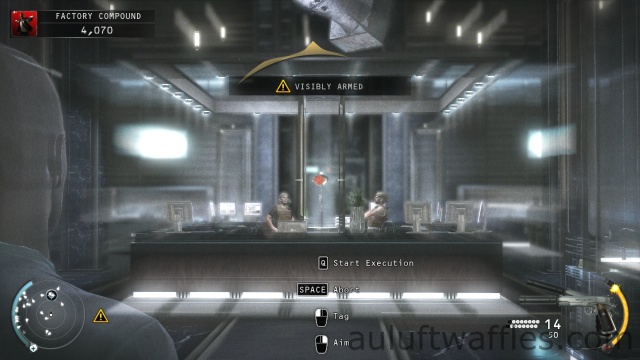 For the packing heat challenge you are required to enter the two weapon rooms in the Dexter Industries mission.

First load into Dead End on the normal difficulty and sneak into the area on the left side. Wait for the two guards near a building to have stopped talking and follow the guard that enters the building:

Pick up the key card inside the building. Then get out of the area again in the same way you got into it. Climb through the window into the security station and out the other side. The building in question is just ahead. Go to the right side of it and open the door:

Now load into Factory Compound. Get the client’s suit and key card and make your way into the room with the Charlie the Chipmunk outfit in it as described before in the chameleon challenge.

Completing the Under the Bridge – Part 1 to 3 Challenges

For under the bridge – part 1 you are required to kill an enemy using the silenced sniper rifle so that the body falls off the bridge.

The rest of the challenges are unlocked when you complete the purist run in the way the following guides suggest: