The KAP-40 is the last pistol you unlock in Black Ops 2 at level 43. It is the only automatic pistol with a high fire rate but few bullets per magazine. It is best used at close to medium range since at long range the recoil of the KAP-40 makes it difficult to aim. The fast handling characteristics mean that the KAP-40 is well suited to an aggressive role giving you the ability to sprint without having to worry about being caught off guard.

When using the KAP-40 reload after every kill. To make sure you don’t get killed whilst reloading retreat a little whilst reloading. Maneuver the map so that you avoid long sight lines as you will be hard pressed to win an engagement against assault rifles at long range. Also, the recoil of the KAP-40 makes it difficult to shoot an enemy who has just their head showing above cover. Look for engagements where enemies aren’t ready for you as you have a significant advantage in getting ready after sprinting over enemies that aren’t using pistols.

The perks I found useful with the KAP-40 where lightweight, toughness, scavenger and dexterity. Lightweight increases your movement speed which makes strafing more powerful and gets you close to enemies faster. Since even with extended clip the KAP-40 has relatively few bullets per magazine combined with a high fire rate will deplete your available ammunition quickly. Scavenger will let you pick up ammunition packs from enemies. Dexterity brings up the KAP-40 faster after sprinting, which lets you be even more aggressive. Use the black hat to take out enemy UAVs to make sure they can’t get ready for you.

The reflex sight gives a slightly clearer view on target which can be useful but isn’t essential since the iron sights of the KAP-40 are pretty good. The laser sight reduces the hip fire spread of the KAP-40. But, since the KAP-40 aims down the sights very quickly and there isn’t a movement speed penalty, this isn’t really necessary since you can win gunfights more reliably whilst aiming down the sights.

FMJ increases the penetration and damage against scorestreaks of the KAP-40. However, it doesn’t make a notable difference on the KAP-40. Fast mag reduces the time it takes to reload the KAP-40. With fast mag you don’t have to retreat whilst reloading, instead go forwards a little more cautiously whilst reloading, then keep going. But you will still loose an engagement if you run out of ammunition which is the more pressing issue so fast mag isn’t worth using.

The suppressor will keep you off the radar and reduce muzzle flash. With the suppressor you can be near enemies without being detected which is useful for stealth builds. However, the reduced range makes it difficult to take on enemies at medium range, which is an area the KAP-40 is normally fairly competitive in. Also the KAP-40 can kill fast enough that a stealth approach isn’t necessary.

The knife attachment reduces the cool down time between knife attacks and reduces the time it takes to stab with the knife. This is useful in case you run out of ammunition in the magazine or altogether as it leaves you with a viable weapon to take out enemies. However, all of the problems the knife fixes are better fixed with perks and other attachments as they provide extra benefits the knife doesn’t. Dual wield forces you to give up the medium range, which is where the KAP-40 is best, for some better close quarter performance, where other weapons are better. 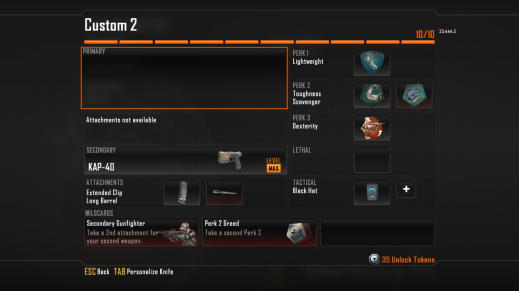 Extended clip grants more bullets per magazine and thus more starting ammunition both of which are a key problem with the KAP-40. With extended clip you can afford to miss a few shots and even take on more than one enemy without reloading. Long barrel increases the range of the KAP-40 which reinforces the already powerful medium range performance of the KAP-40. With long barrel don’t be afraid to take on any enemies, unless they are entrenched behind cover waiting for you. In that case it is better to avoid the engagement or seek an alternative route to the enemy.