The Executioner is the fourth pistol you unlock in Black Ops 2 at level 31. It is a semi-automatic weapon chambering five bullets per magazine. The Executioner shoots eight pallets per shot, similar to a shotgun. When you aim down the sights of the Executioner the pallet spread becomes tighter compared to firing from the hip. The Executioner is best used at very close range, and even there it is difficult to handle. The advantage it has over the shotguns are faster handling characteristics and tighter hip fire spread, but at a cost of long reload times and worse range.

When using the Executioner you have to be in close quarter combat. Even at medium range where you still can get hitmarkers the five available shots per magazine are usually not enough to kill, and if you ever have to reload in the middle of an engagement you are very unlikely to survive. In general the normal reload time of the Executioner is a big problem since you usually have to reload after every kill. It is also uncommon that you can take one enemies in quick succession and even rarer that you can fend off two at a time. You have to be close to the enemies, but after every kill retreat to reload safely. Once you have charge ahead for the next kill, then retreat and reload. Should you not be able to retreat use cover to try and keep out of line of sight of enemies close by which can buy you enough time to reload safely.

Aiming down the sights of the Executioner is tough because the high visual recoil makes it difficult to keep your aim on target. It is almost always better to fire from the hip and avoid engagements where aiming down the sights would be useful. Thus using the reflex sight doesn’t offer any benefits. Since almost all of the engagements you get into you will be firing from the hip, with the laser sight the Executioner will be an all-around better weapon.

The long barrel increases the range of the executioner and thus lets you take on targets that are further away. However, the difference the long barrel makes is minimal and there are much better attachments for the Executioner. FMJ increases the penetration and the damage against score streaks of the Executioner. Both of those advantages are rarely useful since if you have to shoot through cover you are unlikely to get the kill anyway and the range of the executioner is too short to be of any use against air support. All other scorestreaks are too rare to warrant using FMJ.

Fast mag is essential to almost every building involving the executioner. The reload time is significantly reduced transforming the Executioner from being frustrating to being an enjoyable weapon as it lets you be more aggressive. The suppressor is also a good addition to the Executioner as it lets you be close to enemies and shoot them without alerting them. With it the longer reload times often aren’t an issue if you take out enemies one by one and remain out of sight of the rest of the enemies.

The knife attachment is useful if you run out of ammunition during an engagement or after you’ve finished one enemy another one is already charging at you. In both circumstances the knife can quickly dispose of the problem enemy. 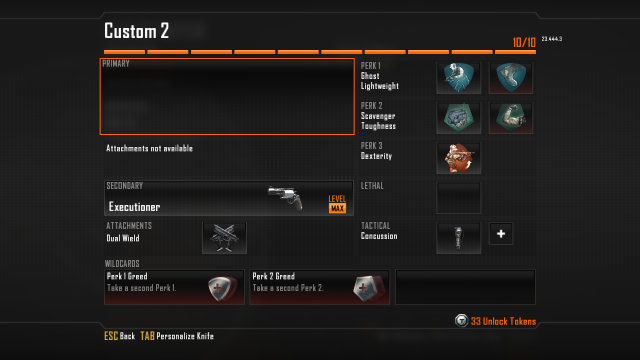 But the best attachment of them all is the dual wield attachment. You cannot use any other attachments whilst using dual wield, but dual wield comes with fast mag by default. Dual wield lets you easily take on two enemies, even simultaneously, as you have much more firepower at your disposal. You can also more easily take on enemies at medium range since what used to be five bullets usually only getting hitmarkers now is ten bullets in the same time which have a much better chance to kill.

Ghost allows you to get close to enemies without being detected should the enemy team call in a UAV. Lightweight gets you there faster. I found that I ran out of ammunition quickly. Use scavenger which lets you pick up ammunition packs dropped by the enemies. Dexterity brings up the executioner faster after sprinting which is useful since you are always on the move.

Hitting a fleeing enemy with a concussion grenade will stop them from running away and easily lets you get close enough to shoot them, unless they are wearing tactical mask.