Posted on December 31, 2012 by auluftwaffles

At the start go straight ahead to the other side of the Chinatown square. When you get into the side alley with a small car in it stay close to the left wall until you can pick up a bottle from behind a box. Throw it through the hole in the wall separating an area from the alley:

Then go through the gap in the wall to the right side of the area past the distracted police officer and cook. Take cover on the close side of the gap between the boxes next to the fence in the middle of the area and wait for Frank Owens to walk past. Get out of cover, select the fiber wire and follow him until he has gone around a corner. Then garrote him and hide his body in the dumpster near where you hid before.

Near that dumpster is a metal pipe. Pick it up and throw it at the house on the other side of the area over the middle fence:

Then get back out of the area through the same gap you came into it and go back into the square. When you are go right and follow the side of the square until you get to a tattoo shop. Go down the right alley just in front of it. Go up the stairs near the end of the alley and drop off the platform you get onto at the far end. Hide in the dumpster near the open sewers and wait for Larry Clay to show up with a cook. Wait for him to have pushed over the cook: 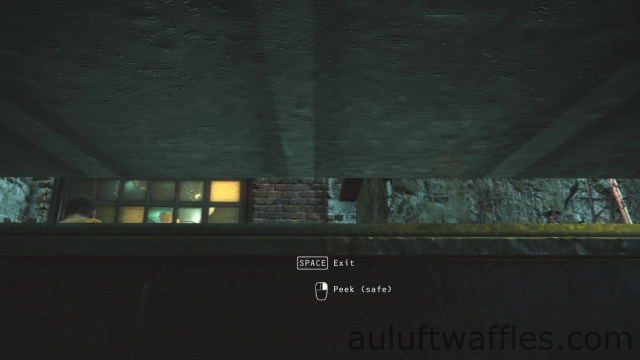 Then get out of the dumpster and select the fiber wire and garrote Larry Clay. Hide his body in the dumpster you just used to hide in.

Go a little way down the alley you are in and you will find the evidence near the right wall.

Go back out of the alley the same way you got into it. When you are near the tattoo shop again your target is the other side of the square. Go there by going through the main area of the Chinatown square rather than straight there to avoid being detected by some police officers. Once you are at your destination there are some stairs down to a lower area. Go down to it and wait for Bill Dole to show up:

Wait for him to be talking on the cell phone then select your fiber wire and garrote him. Hide his body in one of the dumpsters nearby.

The exit is in the alley you picked up the bottle in at the start. Go there indirectly by first going past the tattoo shop again. You shouldn’t be seen by any police officers, but in case you see one be sure to use the crowd to hide in to remain undetected. Once you have gone through the exit door it is the end of the part of the Hunter and Hunted mission called Chinatown Square and indeed the Hunter and Hunted mission.