Posted on December 26, 2012 by auluftwaffles

The Ballista is the third sniper rifle you unlock in Call of Duty Black Ops 2 at level 43. It has the fastest handling characteristics in the class making it well suited for medium to long range engagements with a strong focus on the medium range. However, you still have to be ready for every engagement because assault rifles and sub machine guns will beat you in a fight where neither party is ready.

Even though the Ballista is a more aggressive rifle you have to remember it is a Sniper Rifle. You won’t be able to reliably beat sub machine guns and assault rifles at close range, and even in open combat at medium range. You have to be behind cover and be ready for an engagement as you can be killed faster than the Ballista aim down sight time. That said, be sure to keep moving. When enemies have been shot by you once they likely seek revenge and will do that using the best flank route to the position which will often force you into close quarters combat.

When an enemy is close or you are changing position always pull out your favorite secondary. You will have a much better chance with, for example, a KAP-40 in close quarters than with a sniper rifle and are much more likely to kill them, even opponents with sub machine guns.

I found that the supressor took away too much of the Ballista’s damage to make the fact that it keeps you off the radar and reduces muzzle flash worth it. I got a lot of hitmarkers unless I was specifically aiming for the head. But often you don’t have the time to line up a headshot and you rarely can shoot twice at one enemy before you are dead. The standard scope for the Ballista is good as it provides a level of magnification that fits the Ballista. So I didn’t find the Zoom attachment very useful because the lower zoom level had too little magnification and the higher zoom level had too much.

I didn’t like the FMJ attachment as it isn’t really necersary. It increases the penetration of the Ballista, but that does nothing as instead of shooting through cover you should be shooting over it. I also didn’t like the ACOG scope. You can’t steady the sight and the large amount of weapon sway makes it difficult to aim. Extended clip is a good attachment for the Ballista, but since you are closer to the enemies the problem of long reload times remains which is the more pressing issue with the Ballista. 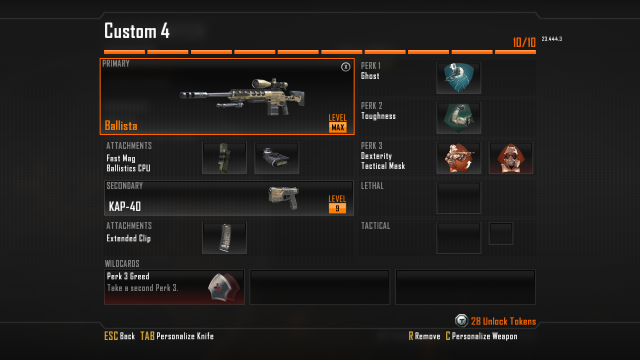 When you are changing position I strongly suggest you pull out your secondary because that is going to be much better in a close quarters engagement than the Ballista. I particularly like the KAP-40 since it is automatic.

With the Ballista you are going to be on the move a lot. Ghost will kep you off the radar and Dexterity will help you should you be caught off guard whilst changing position. Because you are going to have to be more defensive using Tactical Mask is important because enemies will try to render you defenseless with tactical equipment. Toughness reduces the flinch when you get shot and is a necessity for every weapon.