Posted on December 14, 2012 by auluftwaffles

The LSAT is the third light machine gun you unlock in Call of Duty Black Ops 2. It is the most average light machine gun, with an average fire rate, damage and range. It does have some recoil, but not much. It is a very versatile weapon being effective at all ranges except the close range. It is best used to hold down a position that overlooks a high traffic area. This is especially good in the objective game modes.

FMJ increases the cover penetration of the LSAT and the damage it does against score streaks. However, taking out scorestreaks is best done using a launcher, and I didn’t find that I had to deal with many scorestreaks that it is worth using FMJ for that reason anyway. I also didn’t notice any considerable difference in the penetration power of the LSAT. Quickdraw reduces the time it takes to aim down the sights of the LSAT, but is out of place for the LSAT and will only offer minor benefits. Most of the time you will already be aiming before an engagement even occurs.

The Stock attachment increases your movement speed whilst aiming down the sights of the LSAT. Usually you will be stationary whilst aiming the LSAT so this attachment offers very little. The Laser Sight is very powerful. If you prone you can shoot enemies at long range easily without ever aiming down the sights. In close quarter engagements you will stand a better chance, albeit not a good one still. However, both of these are very unique circumstances, so the Laser Sight, whilst effective, isn’t the best attachment for the LSAT.

The Supressor keeps you off the map and gets rid of the muzzle flash. This will make it easier to aim and harder for enemies to find you. However, if you are in a high traffic area, which you should be, the enemies will see and be able to shoot you regardless, so the Supressor doesn’t help much beyond an occasional confused enemy who can’t work out where you are shooting from.

The Extended Clip attachment offers a few extra bullets (35) per magazine. This is of limited use since you usually can safely reload by retreating a little once you get low on bullets. Rapid Fire increases the fire rate of the LSAT. When using it you give up a lot of your long range capabilities, due to more recoil, to get better at the close range. This increase isn’t strong enough, however, to be able to beat assault rifles and sub machine guns consistently at close range, so it isn’t really worth it.

All the optical attachments to the LSAT are good, except the two long range ones. The Zoom attachment works well at ranges outside of where the LSAT is good at. Even with the Fore Grip you will still have a lot of recoil to deal with. The Dual Band scope highlights enemies that aren’t using perks to be hidden. It is a longer range version of the Target Finder, and I never find that it works better than the Target Finder. 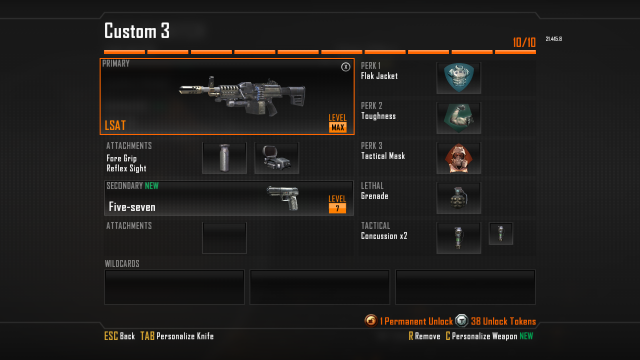 Since the LSAT is good all around the attachments can be used to make it better all around. The Fore Grip attachment reduces recoil, which works well in even close range encounters at it reduces recoil at all ranges which makes it easier to aim. The Reflex Sight gives a much clearer view on the enemies than the iron sights do. It will make it much easier to aim at enemies at long range. However, if you prefer any of the other sights they are also very good substitutes.

Because you are going to be more stationary it is best to use perks to protect you from enemies that you can’t shoot at (who usually throw deadly equipment at you). Flack jacket and Tactical Mask do just this. Toughness is a must for weapons where you do a lot of aiming, in fact any weapon where you can expect to be shot at.

The equipment is not really that vital, use what you prefer. If you find that you get flanked a lot, use a Bouncing Betty to protect your back. However, I prefer to use the Grenade which you can use to defend objectives, even if you are far away from them. The tactical slot is again up to your preferences. Shock Charges can also be used to protect your back. However, I like using concussion grenades which slows enemies down making them easier to shoot. A pistol secondary is important due to the long reload times of the LSAT.