Posted on November 27, 2012 by auluftwaffles

This is the last part of the Fight Night mission in Hitman Absolution which is called The Arena. In it you eliminate Sanchez with a signature kill and escape the area afterwards. This guide explains how to complete this mission on the hardest, purist, difficulty. It does not explain how to complete the different challenges in this area.

At the start make your way around the arena and to the second bar you get to. Wait near the first side of it you get to until the bartender has stopped smoking: 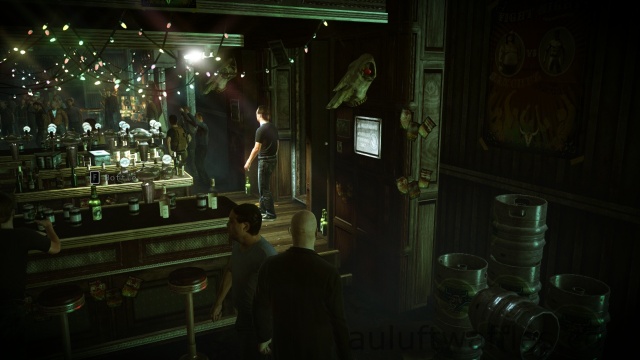 Then go through the door behind him, but stay as close to the right wall as possible. Once you are inside go right and up the stairs. Once you are near the top of the stairs you will see a guard. Wait for him to have gone to the left, then follow him. Once he has gone down the small stairs and you have also gone down them subdue him, take is clothes and hide him in the cabinet in the back corner of the room. Then go back to the top of the stairs and take the screw driver from the black barrel and take cover next to that barrel on the wall to the left of the door: 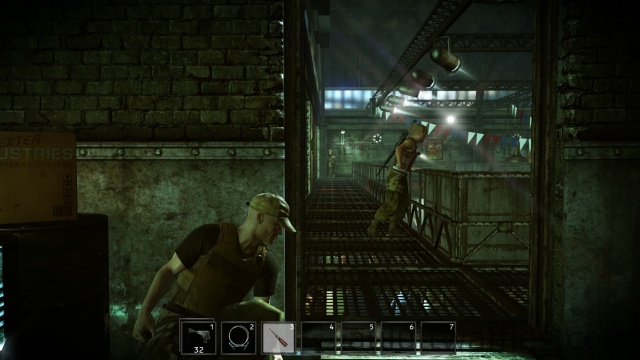 Once the guard has turned and is walking away from you follow the balcony to the right until you get to a door. Swap the screwdriver with the bottle that stands outside of the door, then open the door and throw the bottle at the wall ahead:

Once you have done that pick up the screwdriver again and stand up and take cover on the left side of the door. Once the guard is looking at the wall you threw the bottle against walk into the room and past the trainers into the locker room. On the other side of it is an outfit. Put it on and make your way through the door with the key card scanner next to it and up the stairs. Go into the crate near the top of the stairs and wait for a guard to show up:

Deselect the screw driver. Once the guard has turned around get out of the crate and subdue him. Don’t take his clothes, instead just hide him in the crate you just were in. Go down the tunnel and throw the screwdriver into the corner of the next room: 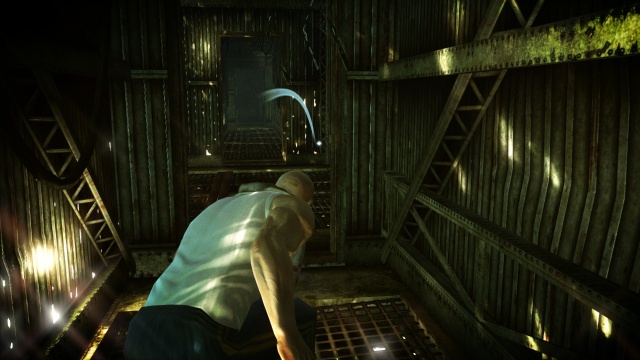 As soon as the guard is walking towards the screwdriver you just threw sneak up on him and subdue him. Then hide his body in the cabinet to the right. Go all the way to the other side of the tunnel and take cover on the left wall. Go up to the end and subdue the guard that is standing there:

Drag this guard all the way back to the cabinet that you hid the other guy in and stick this new guard in it as well. Then go up to the railing and wait for Sanchez to have thrown the patriot:

Then release the lights to get a signature and silent kill on Sanchez.

Next Mission: Attack of the Saints, Parking, Eliminate Jennifer Paxton and Heather McCarthy with Signature Kills