Posted on November 17, 2012 by auluftwaffles

The SCAR-H assault rifle probably has the best sounding fire I have heard in Call of Duty Black Ops 2 so far. However, it is hard to handle, but very powerful when done correctly. It is somewhat similar to the SCAR-H in Call of Duty Modern Warfare 2 (not 3) but has a bigger magazine than it does in that game. This guide explains how to use the SCAR-H well and what the best class setup for it is.

The SCAR-H is very difficult to handle. It has a lot of recoil and fires slowly so it is not effective when fired from the hip (as most slow firing weapons are except for the shotguns). You can’t be as aggressive as with the other assault rifles, capturing an objective is a bit risky as you can’t effectively deal with enemies that rush up to the objective. So it is best to stay back a bit behind some cover and lay down fire on the enemies. However, as I always say, do not stay behind the same cover for long, if there aren’t any more enemies to shoot you should move on.

It is best not to start with hip fire with the SCAR-H because you are most likely going to miss, even at close range. The hip fire start does take some time, so going straight to aiming down the sights will get you accurate much faster than if you start with hip fire. At very long range be sure to burst fire to settle the recoil for better accuracy. 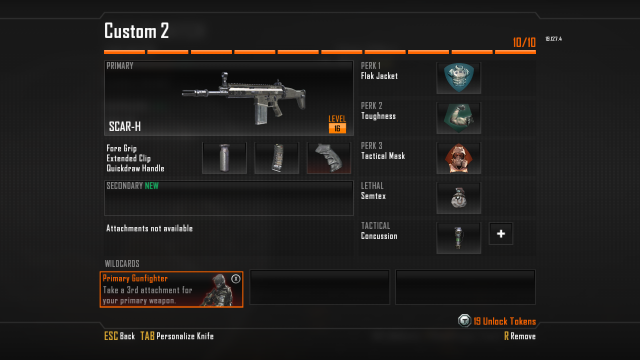 As you are near the main fight around an objective using Flack Jacket and Tactical Mask will reduce the impact lethal and tactical equipment has on you. Toughness is good for the SCAR-H as all of your kills are going to be when you are aimed down the sights and flinch will affect you a lot. Toughness reduces the flinching you do.

Semtex is good because when you are defending an objective and the enemy taking it is hiding behind some cover it isn’t a very good idea to run up to him and shoot him as the SCAR-H is terrible at close range engagements. Instead use the Semtex to either kill the enemy or force him to get out of cover. Concussion grenades can be substituted for flash grenades, but I prefer concussion grenades as it makes enemies affected easier to shoot since their movement speed is slowed.

Since you are going to be behind cover for most of the time you don’t really need a secondary backup in case you run out of ammunition in your magazine. Instead duck down and reload and pop back up.

The attachments to the SCAR-H are designed to make the SCAR-H easier to handle. The rifle takes quite some time to aim down its sights, so using the Quickdraw Handle reduces that time. Often there are a lot of enemies near objectives, Extended Clip gives you the ability to deal with more enemies without the downtime caused by reloading. The SCAR-H has a bit of recoil, the Fore Grip helps keep that in check.