Posted on November 15, 2012 by auluftwaffles

The M1216 is the last shotgun you unlock in Call of Duty Black Ops 2. It is automatic but with a catch, you have to cycle (not reload) the magazine every 4 shots. But it is very fun to use, killing an enemy, cycling the M1216 and killing the next is highly enjoyable to say the least. This guide explains how to use the M1216 shotgun well and what the best class setup is.

There is an error in these guides, there is a difference in spread for the shotguns when you ADS compared to hip firing. Click here to find out more.

The biggest downside of the M1216 is that you have to cycle the magazine every 4 shots. I tried to get around that by using attachments to increase the ammunition per magazine or to switch magazines faster, I even tried to use a perk that increases weapon switching and equipment usage time. None of those made the cycling any better, it took the same time and had to be done every 4 shots regardless.

When you encounter an enemy that is at the limit of your range be sure to try to use cover to get a bit closer before you start shooting. The main time of death is when you have to cycle your weapon, so making sure that an enemy is killed with the first 4 shots is vital. Also if an enemy took say 3 shots be sure to fire a fourth so that you have another 4 shots ready for the next foe.

The main skill in using shotguns lies withing moving around he map so that you are always within effective range of the M1216. Use the routes that you know don’t have many (or preferably any) long sight lines or good cover for an enemy with an assault or sniper rifle to hide behind. You should always be in the thick of the fighting with the M1216 as you are best up close and personal. 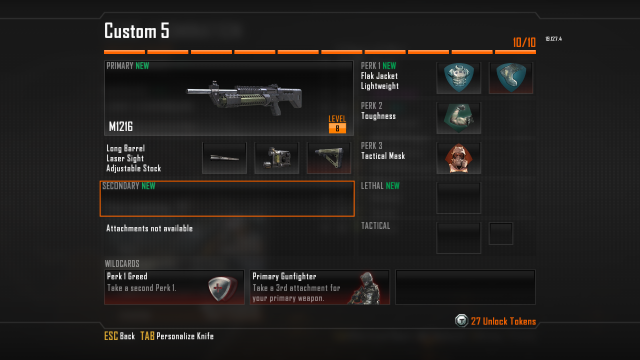 This class is heavily focused around using the M1216 shotgun. That is why there is no secondary or grenades of any kind. Improving the effectiveness of the M1216 is much more preferable than any of those.

When you are in the thick of the fight there are going to be many very dangerous events. To decrease the number that can harm you use Flack Jacket and Tactical Mask as combined they limit how much impact equipment can have on you. To get you to the thick of the fight faster Lightweight comes into play. It increases your movement speed slightly, which also makes it easier to strafe enemies when you are engaging them.

The M1216 has very little range, but within that range it is very deadly. The Long Barrel buffs that raneg and makes the M1216 even more deadly. The Laser Sight and Adjustable Stock improve the hip fire accuracy of the M1216 which gives you more killing power in a smaller area.