Posted on November 14, 2012 by auluftwaffles

The Type 25 assault rifle is the second assault rifle that you unlock in Call of Duty Black Ops 2. It is a pretty standard automatic assault rifle posing low recoil and reasonable damage. As with all assault rifles when you are aiming down the sights you move very slowly so you can’t be as aggressive with the Type 25 as you could be with a sub machine gun. This guide explains how to use it well and what the best class setup is.

The class I suggest is build around protecting you from explosives designed to take you out of cover and to help you with aim down sight combat and when you are caught off guard. 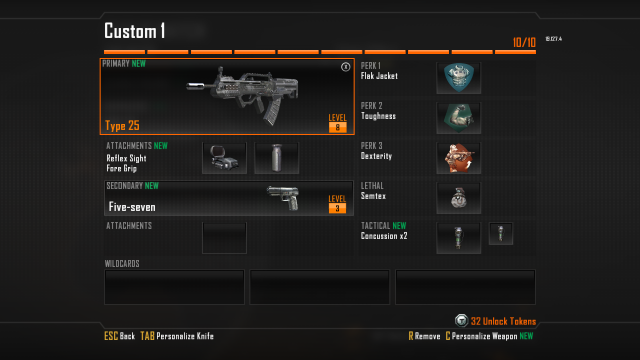 Flack Jacket helps you survive explosives that enemies tend to throw when they are out of ammunition and to get people out of cover. Dexterity makes it easier to win a gunfight at close range when you are caught off guard as it lets you pull up your weapon much faster. Toughness helps you when you get shot as it reduces the flinch.

There isn’t really any specific tactical reason to use Semtex over the standard Grenade so it is up to your preferences what you go for. The same is for the tactical grenades, although for an assault rifle I prefer to use concussion grenades as it hinders the aim of enemies.

A pistol secondary is a must for assault rifles as you frequently run out of ammunition, which is very annoying during a gunfight. When you do switch to your secondary and take the bad guy out instead of going into cover and reloading.

The iron sights of the Type 25 aren’t suited for what the Type 25 is best at, medium to long range fights. So use an optical attachment such as the EDTech Sight or the Reflex Sight. The Fore Grip will reduce the recoil the Type 25 has at long range.