Dishonored Guide: Following the Scavenger to find the River Pearls in the Drawbridge Control Area

You find a scavenger in the Bridge Control area, actually in one of the control rooms of the bridge. He offers you a share of his stash of river pearls. This guide explains how to complete this optional quest undetected and without killing anyone, and shows you where to actually find the river pearls as the scavenger doesn’t lead you to them

There is a visual version of this guide at the end of the guide.

On the far side of the bridge there is a control room with a cell in it containing s scavenger:

You can find the keys to his cell on the one of the guards patrolling the area. When you let him out immediately go towards the walkway behind you and take out the guard walking about on the other side of the semi bridge. I actually went over there before opening the cell and cleared everyone out, but that guard spawned there when I opened the cell. Use sleep darts to take him out as he will shoot the scavenger on sight and you won’t have time to choke him out.

After a little while of following the scavenger he asks you to take out the  River Krusts: 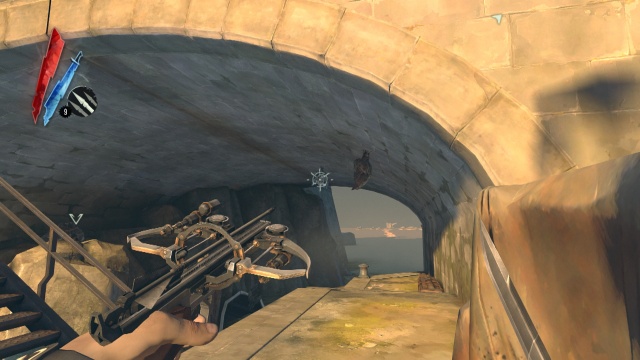 There are 5 of them in total. One on the marker, two on the bottom of the bridge, one on some rocks underneath the bridge and the last under the stairs up. You have to shoot them when they are open. Slowly edge forward until one opens. Shoot the  with a lethal crossbow bolt.

Keep following the scavenger and eventually he asks you to find a key. That is fairly simple, it is inside the little station the marker is next to. When you have the key open the gate, but run back down the stairs and teleport up on the street on the other side of the building the stairs are next to. If you go forward and look left you will see a street which you can use to take the guards out one by one. There are 3 in total.

After you have taken out the guards the river pearls are in the house above the tap:

They are in the room you climb into through the window.

2 Responses to Dishonored Guide: Following the Scavenger to find the River Pearls in the Drawbridge Control Area