Borderlands 2 Guide: Beating the Badass Constructor in the Where Angels Fear to Tread Mission

Posted on September 26, 2012 by auluftwaffles

The Where Angels Fear to Tread Mission is one of the last mission in Borderlands 2. It is also the toughest I have come across so far. But using the right technique you should be able to finish this mission. One of the hardest parts of the mission is when you have to face 3 Badass Loaders, a bunch of War Loaders and a Badass constructor along with some other minor enemies. It is possible to beat this part, I have done it by myself, although with a few deaths. This guide explains how I did it:

First of all before you even start this mission be sure to have completed all the side missions. If you have any trouble with any of them I have written a few guides about some missions that I found strange which you can find on this page. Each chapter unlocks more optional missions, most of them can be started in Sanctuary.

Now, you first have to deal with all the enemies that spawn. Keep retreating until you have killed all of them, if you let yourself get surrounded you are probably going to die. I am playing as a Siren, and Phaselock and a Shotgun are your best friends for dealing with any enemies. Whilst you take out those enemies take note of the position of the badass constructor and try to keep cover between you and it.

I recently wrote a guide about how to deal with constructors. It was actually inspired by this fight and all of what I wrote in that guide applies to defeating this badass constructor too so be sure to read it if you haven’t already. I used the following cover:

This cover is best for killing the badass constructor.

This cover is good because it protects you from the missiles and you can easily walk to the left or right of it and have a straight shot at the critical hit area of the badass constructor. The badass constructor spawns on a ledge above the raised walkway: 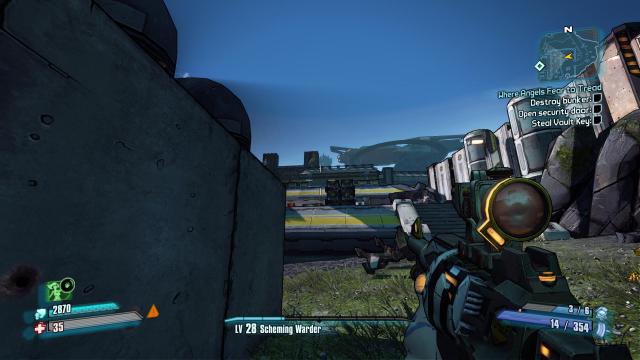 Where the crosshairs are pointing is where the badass constructor spawns.

Killing the badass constructor will take time. Be patient and don’t get frustrated.

2 Responses to Borderlands 2 Guide: Beating the Badass Constructor in the Where Angels Fear to Tread Mission