Borderlands 2 Guide: In Memoriam Mission for Lilith (Locating the Echos)

Posted on September 20, 2012 by auluftwaffles

I was a bit frustrated with this quest, especially with the third echo. The other ones take a bit of looking around and then you should find them. But here is a guide for finding all of them:

Drive up to the quest mission marker on the map. There will be a few enemies including one Badass something. But all you have to do is look up towards the ship and shoot the green glowing bit of chain of the anchor. In the picture I already shot it:

Shoot the chain where it has been severed in this picture.

The anchor will drop. Look at the anchor and you should find it sitting on it somewhere.

Drive up to the mission marker. In the area you should see a pipe sticking out of the ground. Go to it and walk around it until you find a green glowing wheel. I have already turned the wheel in the following picture:

Turn the wheel on the pipe sticking out of the concrete. It should be glowing green.

Interact with it the the second echo gets sprayed out of the pipes.

This echo took me the longest to find. You have to go up on the pipes. You can do that by dropping down from above:

Jump off the ledge and land on the pipes. there is also a weapon chest up there.

You can also use a ladder near the Claptraps ship: 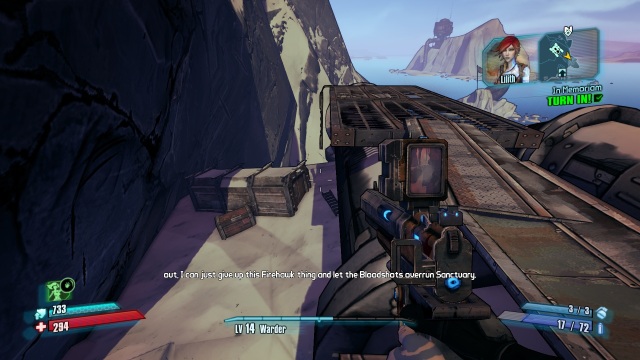 Jump on the box, then the container and then to the ladder.

Near one of the columns holding up the pipe there is a platform. On one side of the column the echo sits in a crevice. I have already taken the third echo in the following picture:

The third echo should be sitting in a crevice on the wall.

10 Responses to Borderlands 2 Guide: In Memoriam Mission for Lilith (Locating the Echos)