Posted on February 13, 2012 by auluftwaffles

Killing Anton Virane Without a Bounty

This quest is managed by Festus Krex. After you have completed “The Cure for Madness” (click for guide) Astrid will as you to report to Festus Krex who will give you he details about “Recipe for Disaster”. He will ask you to question Anton Virane who you can find in Markath in the Understone Keep.

After you have question Anton Virane you have to kill him. This is somewhat difficult to do without getting a bounty. I decided to kill everyone in the room who saw me kill Anton Virane which removed the bounty because the last witness was killed. The guards outside will probably appear as red enemies, but stay hidden and they won’t find you and eventually stop looking.

To get a bonus you have to hide Balagog gro-Nolob’s body after you have killed him. It is easy to kill him without getting a bounty because he is in the basment and nobody else is around. If somebody does happen to be down there with you kill them as well and you won’t keep your bounty.

Dragging Balagog gro-Nolob’s body in a corner will do the trick. I found that the best corner was: 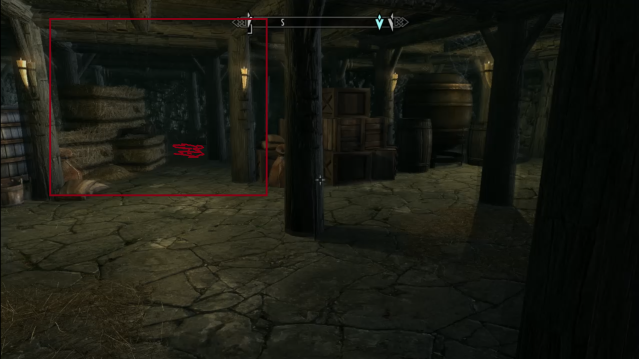 Th highlighted corner is the best place to hide Balagog gro-Nolob's body. Be sure to keep dragging him around the hey stack until the note for completing the optional task appears on your screen.

After you have done the deed of killing Balagog gro-Nolob report back to Festus Krex at the Dark Brotherhood Sanctuary to complete the quest and receive the next quest.